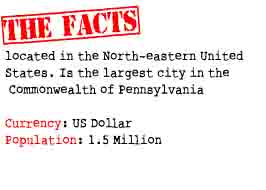 We love Philadelphia for:
Its arts and culture

Languages:  The official language of Philadelphia is English.

Religion   Majority if the population in New York are Christian. New York City has the largest Jewish population outside of Israel.

The Mütter Museum
Philadelphia has a amazing medical history. The Mütter Museum is a medical museum located in the Centre City area of Philadelphia, Pennsylvania. Here you will find a collection of strange medicals, anatomical and pathological specimens, wax models, and antique medical equipment.