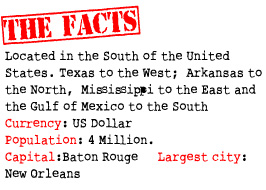 We Love Louisiana  for:  For being the home of Jazz Music

Culture : In Louisiana 62% of the population are White American,  32% are African American and 4% Hispanics and Latinos. Food:  Louisiana Creole cuisine is a style of cooking originating in Louisiana which blends French, Spanish, Portuguese, Italian, Native American and African influences. Popular dishes include Creole Jambalaya made with shrimp, ham, tomato, and Andouille sausage.

Religion   The Largest denomination in Louisiana is Roman Catholics

The economy of Louisiana holds the biggest producer of crawfish in the world. The fishing industry plays in important part in Louisiana economy.

Take a swamp tour
Take a trip on Louisiana Wetlands, stroll with the inhabitants of the swamp, particularly the life and habits of the American alligator learn about the unique history of the Cajun town

Music Festival
Music Festivals with Louisiana being the home of Jazz and with over 400 festivals annually your sure not to miss out. One of the more famous festival the New Orleans jazz festivals or known as the jazz fest normally at the end of April or beginning of May.