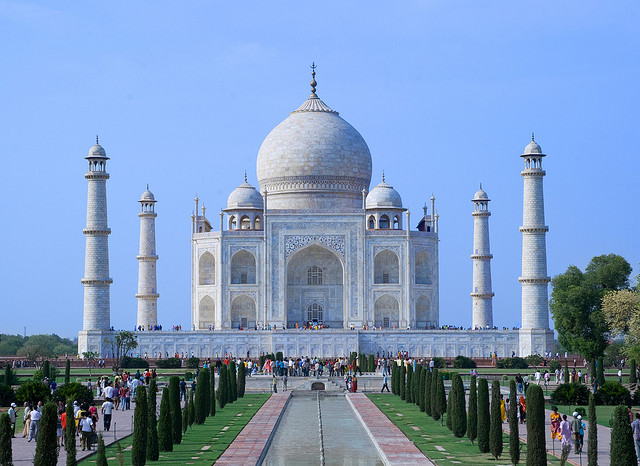 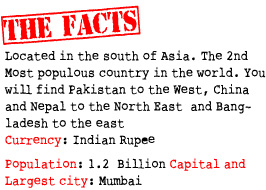 Culture : The national Census of India does not recognize racial or ethnic groups within India. In India, there are 1,652 languages and dialects in total. Food:  Cuisine of India varies from region. Indian cuisine is one of the most popular cuisines in the world. Popular dishes include chapatti (bread), tandori chicken, Korma, masala and madras, rice is a staple food in India.

Sport: India’s official national sport is field hockey. However Cricket by far is the most popular sport.

Languages:  The official languages in India are English and Hindi. Hindi is the largest spoken language with English used in business administration. Bengali is the 2nd most popular language in India.

The economy  of India is one of the fastest growing economies in the world. As of 2011, the Indian economy nominally worth wasUS$1.843 trillion. Major exports include petroleum products, textile goods, jewellery, software, engineering goods, chemicals, and leather manufactures

Taj Mahal
One of the beautiful architecture of India. One of the 7 wonders of the world. Built in 1631 taking 22 years to complete.

Visit the resort of Goa
For beautiful beaches and luxury

Hindu Festival
The Durga Puja festival which takes place during September/October in (Calcutta). This is the biggest Hindu festival full of vibrant colours, music and food.

Tea plantations
Take a tour on a lovely tea plantation tour and find out where your lovely cup of tea comes from.