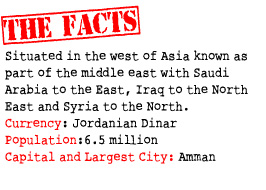 Jordan Facts:  Over half of Jordan is covered by the Arabian Desert.

Culture : 40% of the population in Jordan are born in another country. Jordanian citizens made up 93% of the population Food:  Jordon is one of the world’s largest producers of olives in the world. Hummus (Blend of chick peas) is a popular starter in Jordan. Mansaf is a traditional Jordan dish, lamb cooked in a fermented yogurt sauce served with rice.

football is the most popular sport in Jordan.

Languages:  The official language of Jordan is Arabic. English is widely spoken throughout the country.

The economy  of Jordan is classed as a upper middle income country. Producing goods in  the textile, aerospace, defence, ICT, pharmaceutical, and cosmetic sectors.

Visit the site where Jesus was Baptised

The area known as Wadi Kharar is believed to be where John the Baptist lived and Jesus Christ was baptized. It was here that Jesus first prayed to God and gathered his first disciples.

Float in the Dead Sea
The lowest point in the world. One of the only places in the world where you can float on water

Visit world Heritage Site Petra
While the Treasury is the most iconic site within Petra, the 30 minute hike up to the Monastery is worth the extra effort. Find a rock and just look at the vast, icy-blue skies and soak in the enormity and former glory of the Nabataean Kingdom.