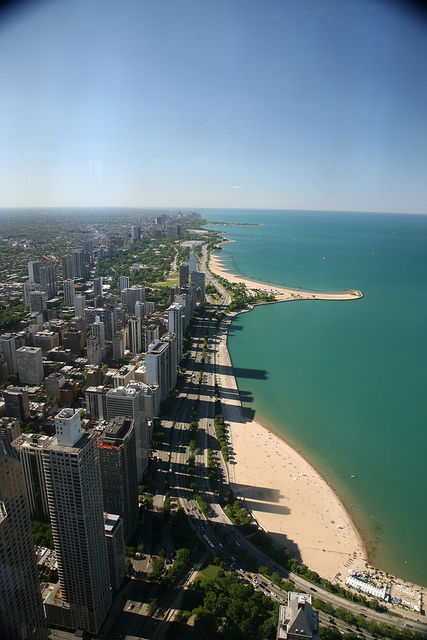 Weather: The climate of Illinois varies due to its distance between north and south. The average temperature in January in Chicago 30˚F . Whilst in summer (July) 85˚F

Culture: 65 % of the population in Illinois are White American. 15% are African American, 14.9% are Hispanic/Latinos and  4.3% Asian American . Food: The taste of Chicago is the world’s largest food festival held annually. Some of the dishes found in the festival include; Chicago-style pizza, Chicago hot dogs, barbecued ribs, Italian Beef, Maxwell Street Polish Sausage and Eli’s Cheesecake,

The most popular sports include American Football, Baseball and Basketball. The Chicago Bulls of the NBA is one of the most recognized basketball teams in the world, due largely to the efforts of Michael Jordan, who led the team to six NBA championships in eight seasons in the 1990s.

Languages:  The official language of Illinois is English. Spanish is spoken by 10% of the population.

Religion   Roman Catholics are the dominating religion in Illinois with the largest concentration in Chicago.

The economy  of South Illinois is known for its natural resources like coal, timber, and petroleum.

Chicago food festival
Held Every year .. lasting around 8 days around the 4th of July. Apart from the delicious food on offer (Hot dogs, pizza, bbq ribs and more) the festival provides a host of entertainment live music from multiple stages. There are also rides at the festival including Ferris wheels.

Shopping
A great place to shop is Michigan Avenue in Chicago.

Chicago Shakespeare Theatre
Take time out and watch a play from one of Chicago’s iconic centres.