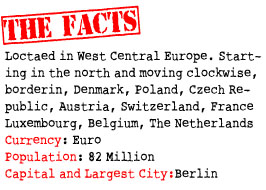 Germany Fast Facts: Germany is the most populous country in the European Union

Weather: Most of Germany has a temperate seasonal climate. Winters are mild and summers tend to be cool.

Demographics: Germans by nationality make up 91% of the population of Germany Food:  German cuisine varies from region to region. Sausages are a popular dish in Germany. Beer is a popular beverage in Germany.

The most popular sport in Germany is football. German Football Association is the largest sports organisation of its kind worldwide

Languages:  The official language of Germany is German

Religion   Christianity is the largest religion in Germany

The economy  of Germany is the largest and most powerful national economy in Europe, the fourth largest by nominal GDP in the world. Germany hosts Well-known global brands including Mercedes-Benz, BMW, SAP, Siemens, Volkswagen, Adidas, Audi, Allianz, Porsche, Bayer, Bosch, and Nivea

The Deutsches Museum in Munich, Germany, is the world’s largest museum of technology and science

The Movie Park Germany is a theme park with real movie studios in Bottrop-Kirchhellen. It consists of 6 areas based on the topic "fascination film"

Is a former city gate, rebuilt in the late 18th century as a neoclassical triumphal arch, and now one of the most well-known landmarks of Berlin and Germany.

The memorial contains the last piece of Berlin Wall with the preserved grounds behind it and is thus able to convey an impression of how the border fortifications developed until the end of the 1980s.