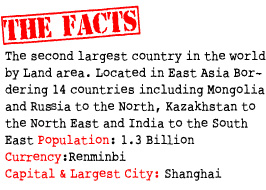 Culture : There are around 56 recognised Ethnic groups in China. China officially recognizes 56 distinct ethnic groups, the Han Chinese is the largest making up 91.51% of the total population.[The Han Chinese are the world's largest single ethnic group Food:  Chinese food varies from region. Chinese pride themselves for eating a wide variety of foods. Rice and Noodles are Chinas stable foods. Soya Sauce is from China.

Religion   Buddhism is the most popular religion.  The largest group of religious traditions is the Chinese folk religion or otherwise known as "Shenism",

The economy  of China is Known for having a market economy based on private property ownership, and is one of the leading examples of state capitalism. As of 2012, China had the world's second-largest nominal GDP, totalling approximately (US$7.47 trillion) Being a low cost producer in manufacturing and high productivity, favourable government policy has contributed to the success of China economy.

Great Wall of China
Over 5,500 miles of wall winding through China built over 2000 years ago. It was built to protect the Mongolians from conquering China. A major tourist attraction for China.

Visit the Forbidden City
Take a chance to visit this imperial Palace located in Beijing Chinese architectural accomplishment. This palace was once home to 24 emperors.

Hong Kong
Is one of the most beautiful cities in the world to visit with its modern architecture of buildings.

Visit the Museum of Qin Terracotta Warriors and Horses
A sight not to be missed by any visitor to China. Life size terracotta figures of warriors and horses are arranged in battle formations. There are around 7000 statue solders all together in the pits. These amazing statues where buried in 240BC but only discovered in 1974 when a Farmer was digging a well.