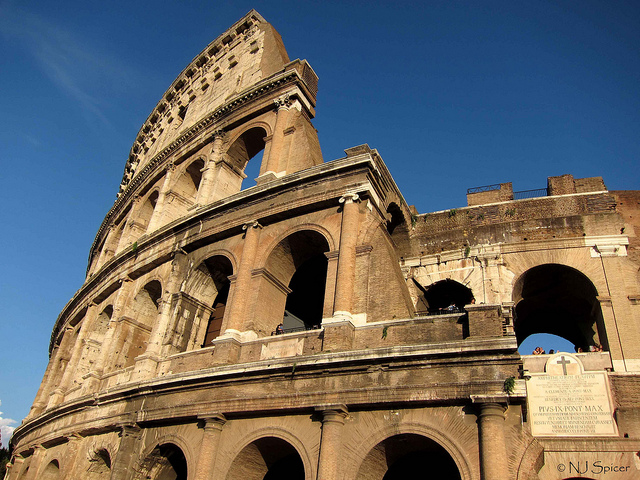 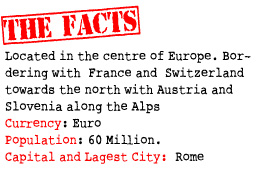 We love Italy for:  Being the heart of Romance

Weather: The climate of Italy is a temperate seasonal climate meaning that it falls between the tropics and Polar Regions. Meaning that part of the country can be extremely hot whilst other cold.   The warmest average max/ high temperature is 31 °C (88 °F) in July & August. The coolest average min/ low temperature is 3 °C (37 °F) in January.

Culture : Around 7.5% of the Italian population are made up of foreign nationals. Of this 7.5%, 54% immigrated from Europe, 22% immigrated from Africa, 16% from Asia and 8% from America. 87% of immigrants live in the northern and central parts of the country (the most economically developed areas), while only 13% live in the southern half. Food:  Cheese and wine play a major part in Italian cuisine. Famously well known Italian dishes include, Pasta, Lasagne and Pizza.

The most popular sport in Italy by far is football. Basketball and Volleyball are also very popular sports in Italy.

Languages:  The official language of Italy is Italian

The economy  of Italy is  a free market economy with a low unemployment rate. Italy is the 7th largest world exporter of goods including precision machinery, motor vehicles and more famously known for its luxury vehicles clothing and food.

Do not leave Italy without having a trip on one of the Wine Tours. Italy has been a true classic supplier of wine.

Visit the Colloseum
This huge sporting ground. Famously known as the battle grounds for the Roman Gladiators who where usually salves.  Admission to the colloseum will set you back around £15 Euros.

Grand Canal
Situated in Venice. Made famous by many movie love scenes. This trip is truly beautiful. Here you will witness beautiful architecture setting back centuries in history.

Visit the Leaning Tower of Pisa
Take a visit to this remarkable sinking structure. Truly one of the landmarks of Italy.