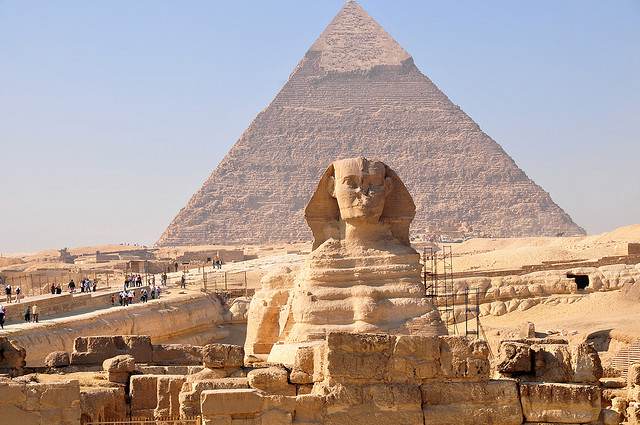 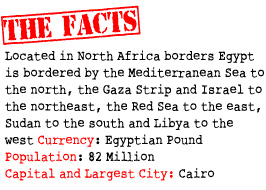 We love Egypt for:
Pyramids: Visit great monuments of its ancient cavitations from the pyramids to the great sphinx.

History: With over 6000 years of recorded history. A country with a whole amount of history that has made a huge contribution in today’s world, from the pharaohs, temples calculation of time and record keeping in writing most famous hieroglyphics.

Weather: Temperatures average between 80 °F (27 °C) and 90 °F (32 °C) in summer, and up to 109 °F (43 °C) on the Red Sea coast. Winter temperatures average between 55 °F (13 °C) and 70 °F (21 °C). Culture :Egypt is definitely the place to catch some sun rays. With over 6000 years of recorded history. One of the earliest civilisations, Egypt has a stable culture which has influences European, Middle East and African Cultures. Cairo being the largest city in Africa. Egypt is a trend setter in its music, film, television in the Arab speaking world.  Food:  Bread is a main commodity in Egyptian cuisine/ Bread is used as an edible utensil used to scoop up sauces and dips also wrap kebabs and falafel. Some signature Egyptian dishes include Koshari, rice, lentils, chickpeas and macaroni also one of the favourite dishes Ful Medames (mashed fava beans). Fava beans are also used to make Falafel.

Egypt’s most popular sport is football. According to the FIFA World Rankings the Egyptian national football team is ranked among the best in the world. The country is home to many African championships such as the Africa Cup of Nations. Despite this Egypt has only made two appearances in the world cup with no victories.

Religion   Egypt is a Sunni (sometimes referred to orthodox) Muslim country with Islam as its state religion. To most Egyptian Muslims Islam plays a very large and important role in their lives. The informal effect of regulating the pace of everything from business to media and entertainment is affected by the Adhan (Islamic call to prayer) which is heard five times a day. Christians make up between 5-10% of the population belonging to the Coptic Church however there is some discrimination from Government for Coptic Christians

The economy of Egypt depends mainly on, tourism, petroleum exports, tourism and agriculture. Over 3 million Egyptians work abroad mainly in Saudi Arabia they contribute back to the Egyptian economy through remittances.

Travel Tips
Egypt is a stable county however due to thirty years of authoritarian rule, an erratic economy and rising living costs there have been riots in some parts of the country mainly in Cairo. Tourists are advised to check travel updates before travelling January 2012

Visit the Great Pyramid of Gaza and Sphinx
Go on a tour to ancient Egypt. The Great Pyramid of Giza is the oldest and largest of the three pyramids in the Giza Necropolis Egypt. It is the oldest of the Seven Wonders of the Ancient World, and the only one to remain largely intact. The Great Sphinx is one of the world’s largest and oldest statues. The Sphinx statue with the head of a human and the body of a lion.

Snorkelling and Diving
All year round the Red Sea has comfortable temperatures this gives the opportunity to have visibility to over 1,000 species of fish. If you lucky you will get a chance to see some dolphins and turtles as well. Just perfect for a snorkelling trip.

Jeep Safaris
Most tours give you a chance to drive through the Eastern desert. Here you get away from the main tourist land. Get a chance to witness the beautiful sunset in the desert. Most tours will include a resting point with local music and food usually a BBQ. Prices and availability varies.