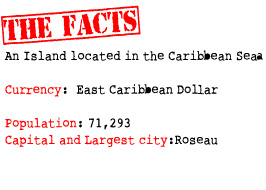 Fast Fact:  Dominica is largely covered by rainforest and is home to the world’s second-largest hot spring, Boiling Lake.

Culture : The ethnicity of Dominica is black 86.8%, mixed 8.9%, Carib Amerindian 2.9%, white 0.8%, other 0.7% Food Traditional Dominican dishes include "pelau," a one-pot dish of rice and chicken, mountain chicken (frog).
Sport: The major sport in Dominica is cricket
Languages:  The official language of Dominca is English. Native language for the island is Dominican Creole French

Religion :  Majority of the Dominican population are Christian.

The economy of Dominica is dominated by Banana trade and other agriculture economy and nearly one-third of the labour force works in agriculture.

Morne Trois Pitons National Park
a tropical forest blended with scenic volcanic features. Features include the boiling lake and the most beautiful waterfalls