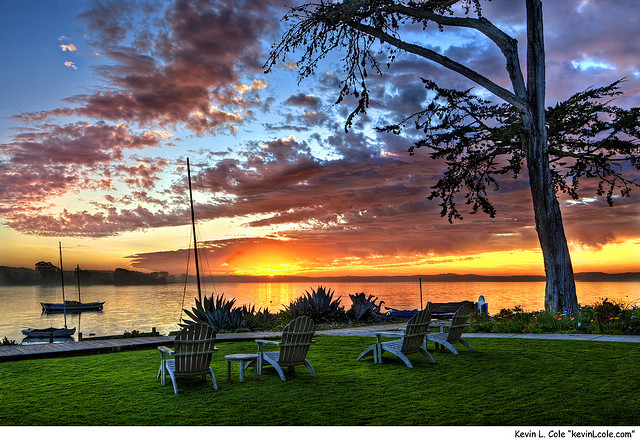 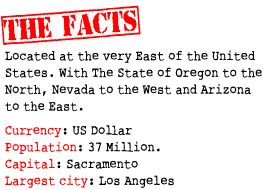 Fast Fact:  California is the most populous state in the USA.

Weather: The climate of California is Mediterranean with wet winters and dry summers. In Los Angeles the average day temperatures for Dec/January 69 -21 Jul 84 29.  Sacramento 54 12 in Jan Dec and 92 33 in July/Aug

Culture : California is the most populous state in the US. 40% of the population are non Hispanic White, 37% of the population being Hispanic or Latino and 6.2% being black or African American and 13% being Asian. Food:  California has developed a fast food culture  Many of the well known restaurant chains such McDonald’s, Jack in the Box, In-N-Out Burger, Carl’s Jr, Del Taco, Original Tommy’s, Fatburger and Big Boy were all established in Southern California .

The most popular sport  in California is motor sports and auto racing.  Other popular sports include American Football, Baseball, Ice Hockey, Basket Ball and Soccer.

Languages:  The official language of California is English however it is spoken by 57% of the population with the remainder mainly speaking Spanish.

Religion   Majority of Californians are Christian. Many believe in God.

The economy  of California is the largest in the United States. The Major exports for California in 2008 was computers and electronic products. Account for 47% of their exports.

Alcatraz
One of the most infamous prisons in the country for housing notorious criminals. No longer a prison. Alcatraz was used as a federal maximum security prison from 1934 until 1963, when it was closed due to high costs and security issues. Tours are available 7 days a week.

Balboa Park
One of the most popular parks in United States. With a host of attractions including San Diego zoo.

Hendry Ranch Wines
If you love wines be sure to take a tour in this beautiful setting in Napa Valley. Californian wine is not one to be missed.